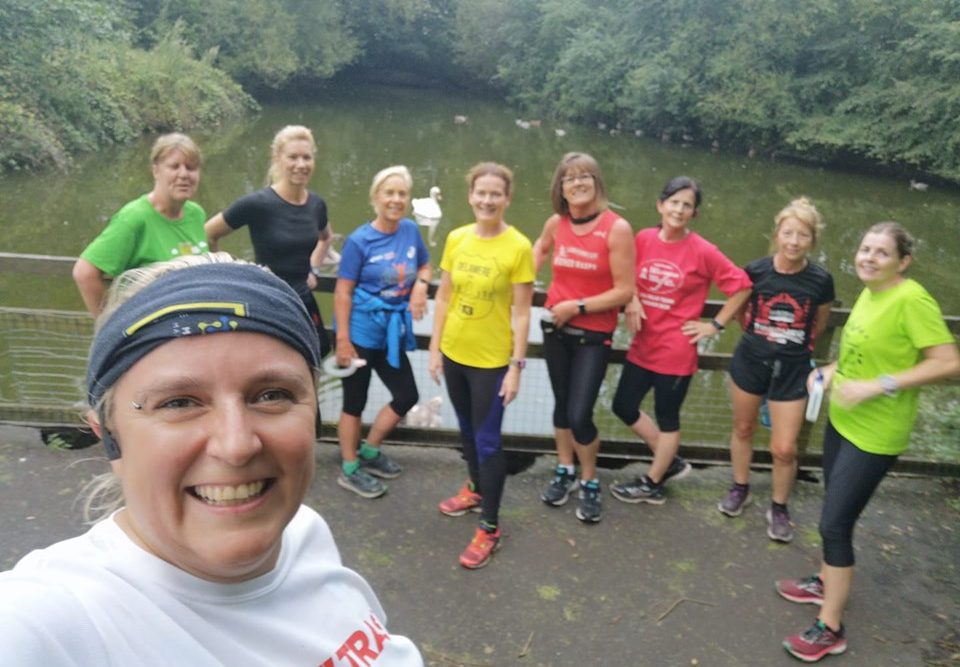 As summer finishes and the running shorts and vests are swapped for running tights and long sleeved tops it is starting to get a little quieter on the racing circuit. We seemed to have favoured trail races this month which are always lovely as the golden hues of autumn replace the sunshine and flowers of summer.

We started off the month with some of our ladies heading to the Wigan 10k for the 7th annual race. This was set up by the Joining Jack charity in 2013 and it has gone from strength to strength, several of our members attend each year saying it’s a great race, well organised with a brilliant party atmosphere at the finish. As you can see these Wasps certainly entered into the spirit of things. Congratulations to Helen D who came away with PB. On the same day Lynsay did a hop skip and a jump to the local Sutton AC Dream 10k trail race   It goes without saying that any race around the Sutton Manor Park is going to be scenic and challenging but she brilliantly finished 5th lady and 2nd in her age group.

The following week (on her 18th wedding anniversary) Rachel took on another tough trail race the Montane Trail 13 at Delamere. Part of the Montane 26 series the route takes on the paths and tracks of the forest and cruelly climbs up Old Pale in the last couple of miles! Rachel worked hard and did us proud and congratulations to you and Paul x

Another gang of Wasps went to Hartford on a beautifully sunny Saturday morning to run the inaugural St Nicholas River Run. The 10k race went through scenic local woodland trails, into Marshall’s Arm Nature Reserve and followed the lovely River Weaver towpaths only to finish with a nasty little set of steep steps. The fundraising event is hosted by the St Nicholas PTFA and includes a 5km trail run and a family 2km meaning there is something for everyone. Our ladies achievements included a 2nd placed lady and two 1st and two 2nd in age categories, pretty good for our little club we’re sure you’ll agree. A couple of things the Wasps agreed on were that the gingerbread men at the finish almost made up for the steps and that they’ll definitely be back next year.

Sue enjoyed being beside the seaside the following day as she took part in the Southport Seaside 10km.  The route takes in the pier, marine lake and of course views of the beach. It’s is advertised as being a fast course and Sue proved this to be the case bagging herself a new 10km PB, congratulations Sue.

The final Sunday of the month saw Wasps racing in Knowsley Safari Park and at Winter Hill. A swarm went to compete in the Kirkby Milers Safari 10 Miler. A single lap course the race starts (fairly obviously) in the Safari park, heads into the Knowsley Hall estate, there’s a short stretch of road before heading back into the park and it finishes with a small nasty hill back to the finish line. What is it with race organisers putting hills at the end of races these days!! The hill was no obstacle to Stacey as she got her 10 mile PB, congratulations. After a week of rain we were lucky to have a dry start to the race but then the rain came as expected and we ended up a more than a little bit wet. However this was nothing compared to the weather that Lynsay encountered in Rivington. The 10k Winter Hill Mast Blast, hosted by Bolton Mountain Rescue, is another trail race taking in the iconic Winter Hill mast, tracks, woodland, moor and bogs. With the heavy rain before the start and throughout the race added to the rain that had fallen earlier in the week it was almost a bog snorkelling event!!  But Lynsay was in her element battling the hills and the weather to finish in 13th place overall and was the 2nd lady. Great work Lyns.

While Barbara was on her holidays she found us our new club transport. The question is how many Wasps can you get in a mini?

And now we’re all ready to head up to Coniston in it to celebrate Jo’s birthday, we’ll let you know all about it next month.