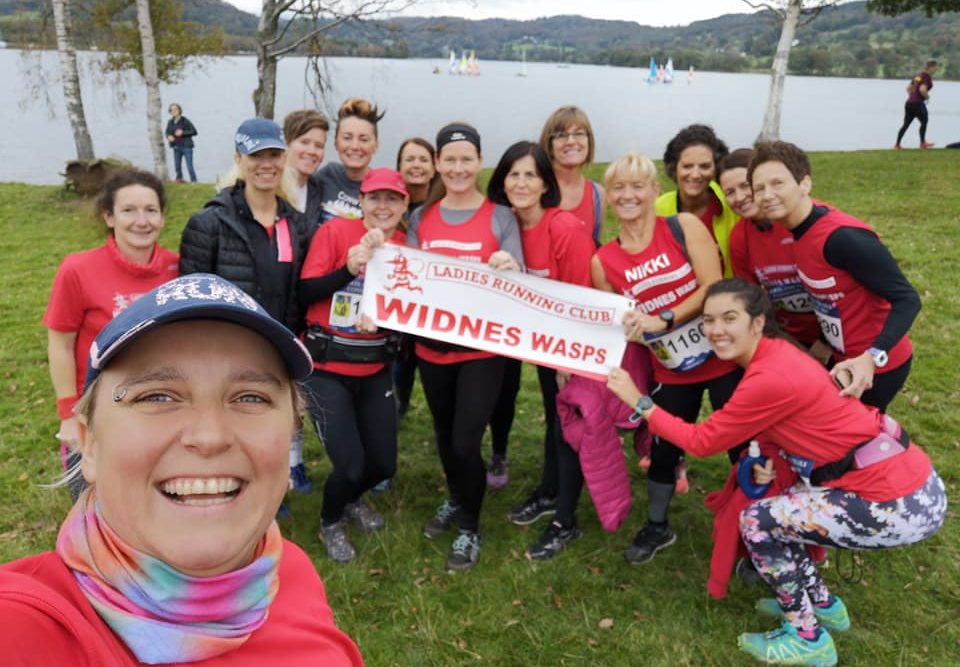 For the Wasps, October started with trail running birthday celebrations and finished with fancy dress night runs and dodgy wigs. Who says running can’t be fun?

Believe it or not our lovely Jo is 50 in November and there is only one way to celebrate with your running friends and that is of course with a run! (Only runners really understand the concept of celebrating with a run). Jo kindly organised a weekend in the Coniston taking in the Lakeland Trails Coniston 15km trail challenge. Numerous Wasps headed up to the beautiful Lake District on the Friday in readiness for the race on Saturday afternoon. The event yet again lived up to Lakeland Trails reputation of well organised and friendly races with a great atmosphere. After picking up our numbers and Jo getting a shout out and a rendition of Happy Birthday from the race compere we were ready for the off.  The race had started at the Landing Point at Coniston Hall and took in a route up towards Coniston Old Man taking in the Coppermines and Slate Quarries. It then descended into Torver and back along the lake shore to Coniston Hall. There were stunning views across the lake and mountains and the terrain varied from road, to muddy paths and fields to technical rocky paths. On an otherwise wet weekend the weather stayed dry for the race, however the organisers were determined that runners shouldn’t stay dry by directing the route through a stream at the end of the race. The celebrations were topped off with a meal at one of the local pub and a few drinks on the Saturday evening. A brisk walk up Coniston Old Man on Sunday morning cleared any fuzzy heads before heading back home.

The monthly RunThrough Tatton 10km has seen Wasps attending throughout the year and October was no exception with Helen D, Helen M and Jo attending. The course is advertised as a fast, road closed race ideal for setting a personal best, although there are a couple of hills in there which don’t make it an easy race.

Marathons were back on the agenda for a couple of Wasps this month and first up was Rachel taking on her sixth marathon. She headed back up to the Lake District (this time with her brother) to compete in the Brathay Challenges Langdale marathon. The race is reputed to be the toughest road marathon in the UK taking in 3400ft of elevations over two 13 mile laps. Starting and finishing in Great Langdale the amazing views of mountains and lakes hopefully help to remove the pain of climbs. Rachel had done the half marathon previously and felt ready to step it up to the full, in preparation for her first ultra marathon in November.

The same weekend we also had Wasps heading down to Mold, popping just along the road to Burtonwood.

Helens D & M, Nic and Michele travelled to Mold for the Run Wales Flintshire 10k. The route starts and finishes in the town looping around it on an ‘undulating but quick’ course. When a Run Director describes the course as ‘undulating’ you can almost guarantee that they are understating the size of the hills which Nic in contrast described as ‘massive’. The ‘undulations’ didn’t stop them from taking two 1sts and a 2nd in their age categories though.

The same morning Sue headed over to the Colliers Moss Common to take part in the last race of the Warrington RC 4 Seasons 5 mile race series. The scenic winter event takes in varying terrain around the common and sends runners up and over the same hill not once but for good measure twice. Sue described the event as a Pure Mudfest and the smile on her face shows it was an enjoyable one.

The following weekend was equally busy for our members starting on the Saturday evening in Delamere. The Petzl Night Trail Running Series commences each year at Delamere Forest with fancy dress being actively encouraged, the theme this year was Spooky Halloween. Stacey, Victoria and Sue simply couldn’t resist the opportunity to get dressed up and of course the Wasps always love and excuse to wear their head torches. It’s a pretty muddy route and no race around Delamere Forest is complete without making the climb to the top of Old Pale.

The next morning Sue was out again, this time joined by Maria for the Scouse 5k. Instead of scary clothes though it was dodgy wigs being donned in the Sunday morning sunshine. Looking at these photos we’re not sure which were most scary the Halloween outfits or the wigs! This is a fun race put on by Mersey Races who host several races throughout the year. Take a look at their website for the 5000 FREE child places at the Spring Kids event next May.

And rounding off the weekend Agata hopped on a plane to run the KBC Dublin marathon with her Michael. This is the second year that she has run this marathon so it must be a good one and it looks like they enjoyed themselves too. The route starts in Dublin city centre and crosses the famous river Liffey, winding its way through Phoenix park before heading back into the city to finish. Just like Rachel this marathon was a training run for the Warrington Way ultra marathon next month. A marathon as a training run!!

Congratulations to all of our racers in October.

Next month has another birthday celebration, one of the Wasps favourite days out and an early Christmas party. Keep an eye out for it.