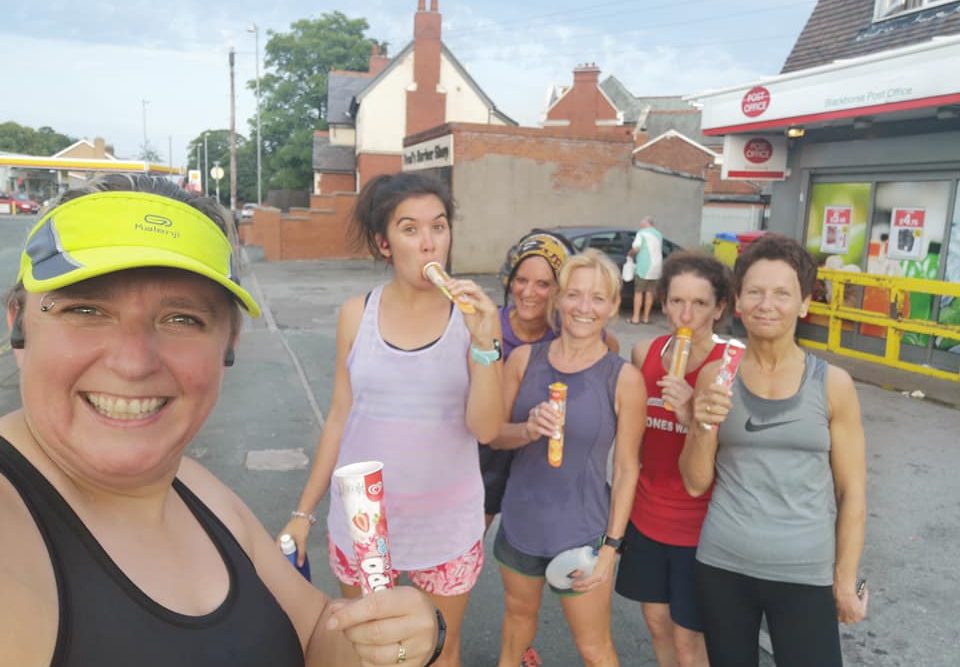 We can’t report on July without mentioning the weather, one week we were buying ice lollies (or is that lolly ices) to cool down after a Thursday session and the following week we were hoping we weren’t about to get hit by a lightning storm! Whatever the weather the Wasps are always out training and racing.

July started with a trip over to Birchwood for Spectrum Striders Forest Park Ladies 5km, with Stacey getting another PB and our little club coming 4th in the team rankings.

Sharon proudly donned the Wasps colours for the first time at the Griffin Grind a local 5 mile race from Rainhill. This race supports the Isabella Rose Foundation who pass the proceeds of the race on to various charities. On the same day Rachel and Stacey headed out to Northwich to the Northwich Festival of Running, taking part in the 10k event. The festival is hosted by Northwich Running Club and includes a 2k, 5k and 10k race making it a family event. Reporting back afterwards Rachel said that the route and the event as a whole were lovely and suggested it as a potential new championship race.

Agata again competed in the Knowsley Harriers Friday evening Fab 4 events but this month she was accompanied by Rachel for the third one.

RunThrough regularly hold running events around the country and Aintree race course is one of the locations they use numerous times a year. The July event saw Victoria taking part in her first half marathon, 4 laps of the course was always going to be hard physically and mentally but she proved her strength and finished in fine style. Meanwhile Helen & Nic both completed 2 laps taking part in the 10k coming 1st & 5th respectively in their age category.

The trio of Stacey, Helen D and Helen M headed down to Wrexham for the Helena Tipping 10km race hosted for the 29th time by Wrexham AAC in honour of one of their members.

And the final race of the month was the consistently popular Tony Barnes memorial 5 mile race held by Mossley Hill RC. This race is always well attended by the Wasps partly because it’s a great race with a lovely atmosphere but I’m sure the post-race curry is a big enticement too.

A bit of Parkrun tourism during July saw Sue at Clapham Common, Stacey at Northwich and Sue Stacey and Rachel at Delamere.